Survey Says Have Confidence in Your Home 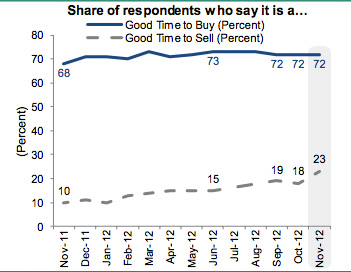 Headlines about the fiscal cliff may lead you to think that housing transactions are tapering off, yet according to the Fannie Mae National Housing Survey for November, that simply is not the case. In fact, Americans are displaying more confidence in the housing market and economy than previously shown, which is good news for your home!

Doug Duncan, senior vice president and chief economist of Fannie Mae stressed in a recent report that, “Consumer attitudes toward both the economy and the housing market continue to gather momentum, with many of our 11 key National Housing Survey indicators at or near their two-and-a-half-year highs.” He continued by concluding that “attitudes about the current selling environment continue to improve, with a significant increase in those saying it would be a good time to sell.”

Five percent more of the November survey respondents believe now is a good time to sell a home (shown at 23%) as compared to October, recording the highest percentage in over 17 months. Nearly 41 percent of those surveyed felt that mortgage rates will be increasing soon and 14 percent believed home prices will decrease in the next twelve months, while 37 percent believed home prices would increase. Respondents are confident on the ability to get a mortgage, with 51 percent believing in the possibility.

Forty-eight percent of those surveyed predicted increases in rental prices and 67 percent reported that they would purchase a home if the need to move arose, giving you more options should you decide it is time to sell your home. Click here to access the Fannie Mae November survey data and graphs.